Data For Refugees: Background and Notes

My research group is entertaining / brainstorming some ideas related to the Syrian refugee crisis in Turkey, as part of the Data For Refugees program. Below are some notes I took on the situation, since I knew very little about the status of Syrian refugees in Turkey.

Syria borders Turkey’s south. There is a significant refugee population in turkey, with over 3 million Syrians under temporary protection 1. Syrian firms account for over 25% of total firms in Turkey 2. Turks compete with Syrians for local jobs 2 and percieve Syrians as contributing to crime, although police data has debunked this perception 2.

67% of Syrian business owner are higher-educated, and 30% have university degrees – higher than Germany’s national average 3. There is, however, a worry that the Turkish response to the influx of Syrian refugees will result in further ghettoization 1.

9 out of 10 refugees live outside the camps that have been set up by the government, with many having migrated to large cities in inner Anatolia or Western Turkey – and also Istanbul 1.

This same source projects that since Syrians do not have a history of agriculture in Turkey, most of these Syrians will stay in cities. While turks are generally “favorable” towards Syrian refugees, few support granting citizenship 4.

There are very few work permits given to syrians, as informal work is extremely profitable for local businesses, there is no collective action potential, etc. according to a report by the economic policy research foundation of Turkey 5. This same report suggests that “social cohesion” between Turks and Syrians is draining where refugees are most visible – on an X-Y plot of the percentage of people who disagree that foreigner presence is good in 2009 vs 2015, countries with the highest refugee population appear above the line of fit, indicating that their change may be driven by higher rates of refugee presence.

In the paper “Syrians in Turkey – The Economics of Integration”, also published by tepav 3, they argue that Syrian integration has largely been through human interaction, rather than explicit policy design. 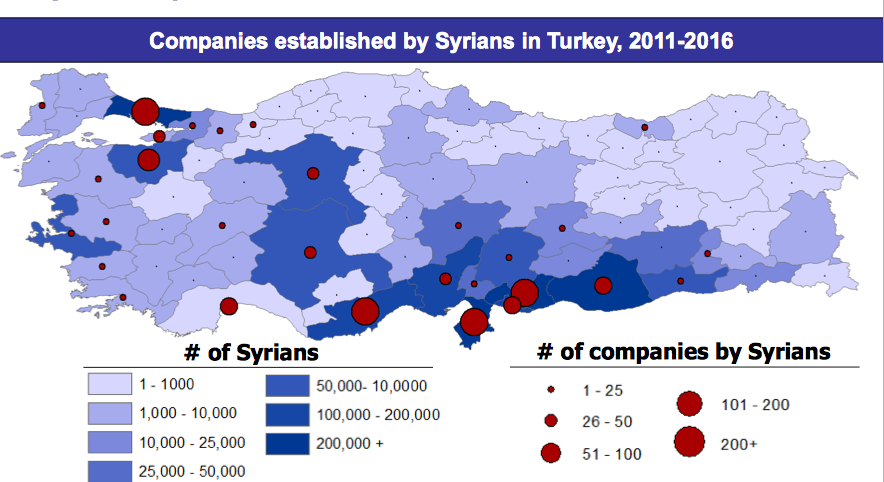 In June, the EU and Turkey signed a $3bn agreement to halt the flow of refugees from Turkey into the EU 6, although negotiations have been tense between Ergodan and Brussels, with Turkey occasionally threatening the EU with an influx of refugees (that’s fucked up) 7.

It seems apparent that the primary justification for naturalizing or granting refugee status (unlikely, as through the geneva convention, Turkey may only grant refugee status to EU members) to Syrians is the economic growth they have and will continue to bring to the country. With 91% of refugees residing in cities, their integration has been primarily through interaction with local communities. Over 750,000 Syrians are estimated to be eligible for work, but only a little over 10k work permits have been distributed, meaning most work is informal, unregulated, and unintegrated.

Given this, I see a few things that should be done with the data available: